We've definitely been feeling a little frazzled here between the hot and humid weather, a sick toddler, and several days cooped up in the house. Luckily, kicking off our dinosaur week is proving to be a great distraction.

Dinosaur books are something I've been collecting for a while now, so we officially kicked off the week by reading several different dinosaur books. Later this week we'll be creating a dinosaur bone excavation, and while I had planned on creating the bones, I realized it would be much more fun to get Big Brother involved. 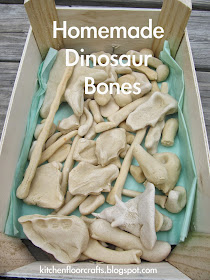 These homemade dinosaur bones were easy to make and are proving to have more than one way to use them.

First I made up a batch of basic salt dough. 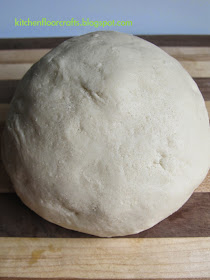 Before we got to work we reread Bones, Bones, Dinosaur Bones by Byron Barton. With bold, colorful illustrations and simple descriptions the book tells how scientists find, dig, move, and reassemble dinosaur bones. We also looked through a handful of other books for a few ideas of what dinosaur bones might look like. 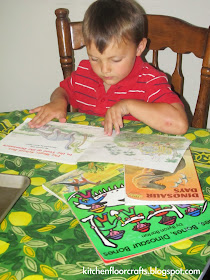 We did not plan on creating bones with a specific dinosaur in mind (although with older kids this would be a really fun challenge.) Instead we worked on creating the pieces we were interested in. 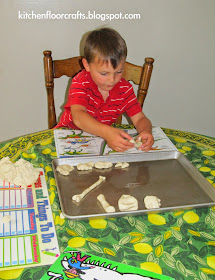 Even Daddy got involved on this project and worked on creating a few pieces. Our pieces ranged from claws and teeth, to backbones, and more. Big Brother even got excited about creating some dinosaur eggs. 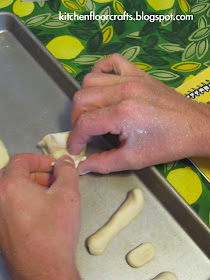 We filled one large cookie tray with bones and another small one. We then baked the pieces in a 250 degree fahrenheit oven for about 3 hours. 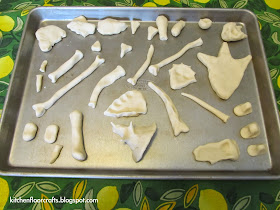 When they were done baking we let them cool on the pan. We then carefully collected them into a container. 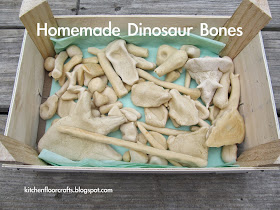 I intended that we would set the bones aside to use later in the week, but Big Brother had other ideas. He quickly took the box and started using the bones as building materials. He worked to create different dinosaur skeletons for quite a while. Inventive and unique building play! 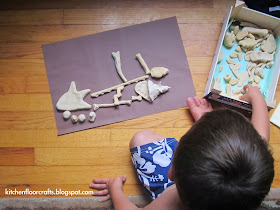